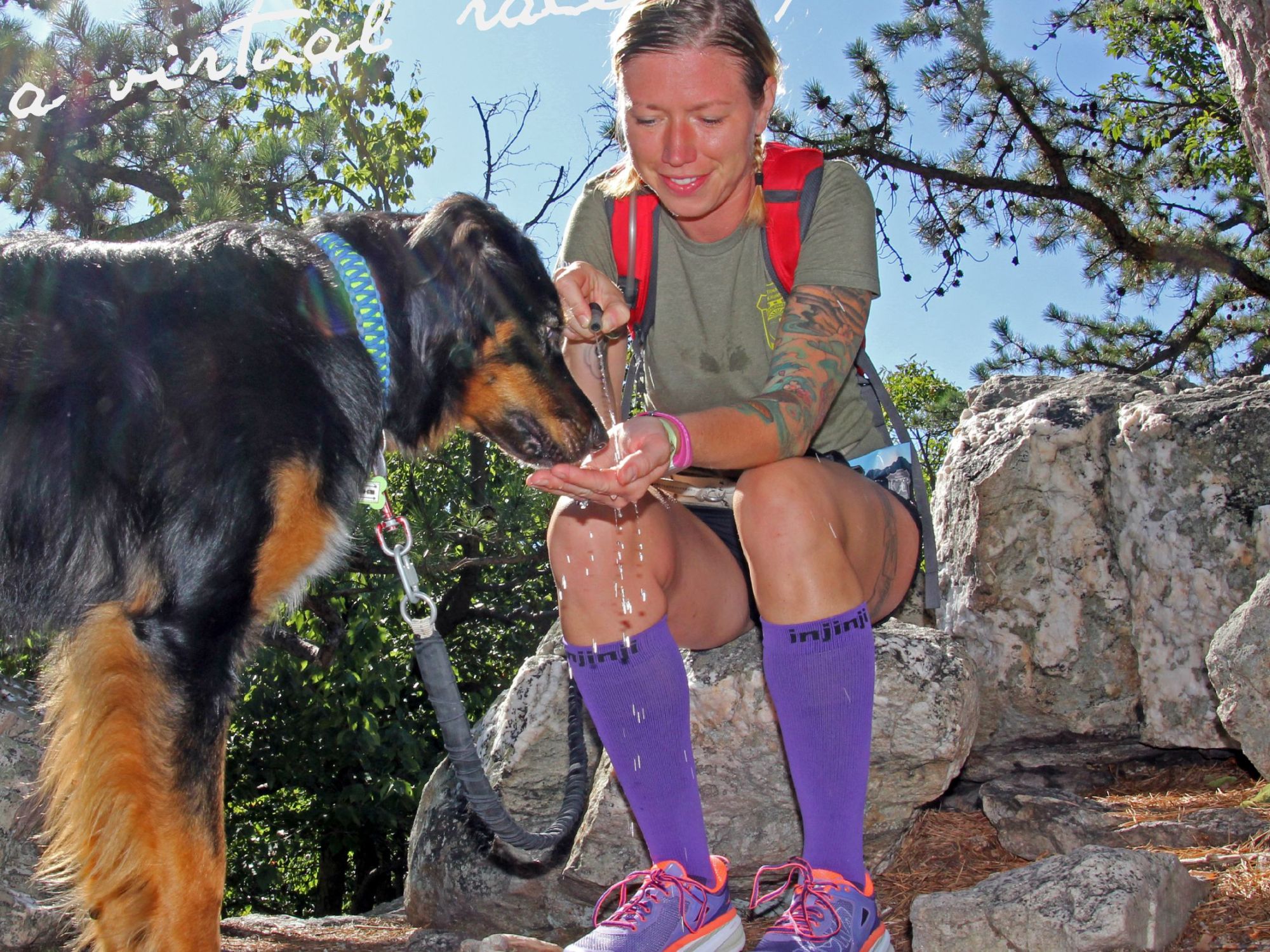 Well, my first virtual race is in the books.  A while back I wrote a blog about virtual races, as I’ve heard about them for a while but had never tried one.  Yesterday was the day!  Barley (the paws) and I set out to hike a 10k for the National Park Service Birthday VR I registered for, and in the spirit of the 99th Anniversary of the National Park Service, we sought out one of Maryland’s most stunning national parks, Catocin Mountain. 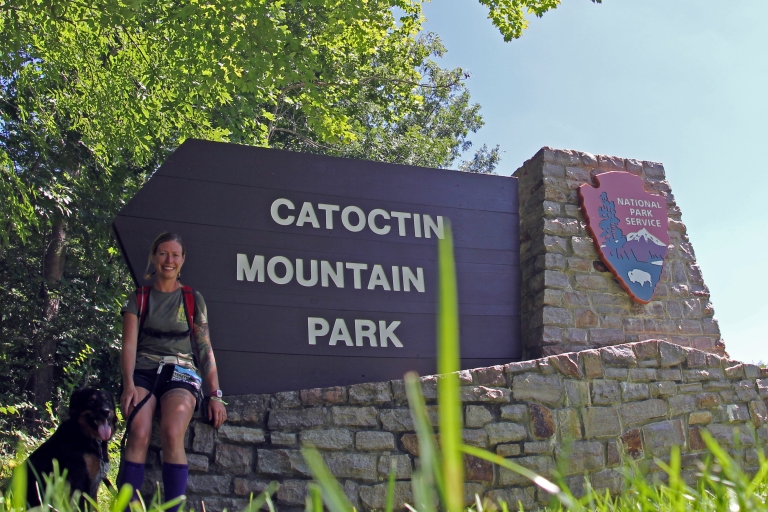 We started at the visitor’s center and followed the trails marked for Wolf Rock and Chimney Rock.  It was a steady 2 mile climb with a cool breeze and a well marked path.  Now, I don’t have a lot of experience hiking the East Coast yet, and on the first hike I did with Chad (Appalachian Trail in the Delaware Water Gap) we managed to stumble upon a rattlesnake, too close for comfort.  Overly cautious, I kept my eyes on the trail and hiked upward with vigor.

We hit Wolf Rock and found a gentleman just finishing up a break in his day.  I took the opportunity to chat with him about snakes since he was far more native to the area than I.  He heard they were common enough, though he had never run into one, and there was a younger guy behind him that was intent on finding them…So far he was empty handed.  WHEW!

Right before we headed out, the younger man intent on finding snakes appeared.  He had heard they were predominant in the area (hence the reason he came here looking for them), but also mentioned they were more nocturnal this time of the year.  We waved off and headed to Chimney Rock, just a short 1/2 mile away…

It’s hard to tell from the photographs, but Wolf Rock and Chimney Rock both had deep and wide crevasses that made it a challenge to navigate, especially with eager Barley wanting to explore.  We sat around Chimney Rock for a while and watched the birds play in the thermals… We were at an elevation of 1,421 feet and they were clearly in their playground.  A quick geological note:  pictured is quartzite that was sea-bottom sand 500 million years ago.  Climate changes and tremendous natural forces compressed the sand into hardened rock and thrust it upward with the formation of the Appalachian Mountains 200 million years ago.

The trail leaving Chimney Rock was marked well, and I decided to head for Crow’s Nest.  Along the way, the path started to look less like a path and more like untreaded nature and soon enough I was lost in the woods.  I never made it to Crow’s Nest, and lost signal with the GPS and phone service so there was no way to tell where I had ended up.  We backtracked a bit, found a clear path, and made our way to Park Headquarters (which meant I knew where I was).  From here it was a mile back to the visitor center and that put me at roughly 4 miles, though I’m certain we logged a bit more due to the error!

We took a break there while Barley gnawed down some pumpkin dog treats and I ate my favorite Honey Stinger Gingersnap Waffle, then worked our way up to Cunningham Falls and Hog Rock… Except I got us lost again and we never made it to either one! Running out of time to forge onward, we needed to be back in time to get Landon off the bus, and my 10k had worked its way up to almost 9 miles.

Overall, with the virtual races I think the key is to make it your own.  I was inspired by the social media community to do more than just run 6.2 miles on a treadmill and report my time.  It was fun to come back from the hike and check out the other participants who opted to post their experiences from the same NPS Birthday VR on Facebook and Instagram, and to put mine out there as well.  However, the little extra motivation to explore, find something new, scare the heck out of myself and work my way through that as well was more worth it than the t-shirt and medal.  The almost-3-hours-in-nature was more than I would have done on a random Tuesday, and judging by his smile, Barley had a good time, too!

We do need to go back and re-explore.  Catocin Park boasts 25 miles of trails and I have 16 left to pack under my belt!

Hey friends- I’ve been missing on purpose… a lot. I’m still here! Just pretty much no motivation to post on social, and feeling pretty lonely. This isn’t a pity party post, so I’m not looking for anything in return… comments, dms, etc.
Little ham
Family float! We got Landon a kayak for his bday and tested it out today on the Penrose to Horse Shoe section of the French Broad- about 10 miles. Clara was a trooper, making her way gracefully between Chad’s boat and my board multiple times, and fell asleep on my lap by the end… Landon mostly kept his distance but hung out every once in a while. We had a few inaugural sunscreen mishaps of course, but damn it was a great day!
Why do I have such toxic work energy with myself as though my job is what holds the house together??? I am an hourly employee making 40% of what my spouse makes and spending less time with my children and him. And I don’t see a solution… I miss out on these incredible moments because I have convinced myself I am needed elsewhere.
Move your body, still your mind. Gomukhasana, cow-face pose
Hi friends- guess what? I’m still broken. Not only that, but I reinjured my bad hamstring climbing and it’s worse than a year ago when I got my PRP injections. I see my ortho next week, I’m hoping there’s something we can do and maybe need some updated imaging? In the meantime, I’ve started to think that part of the answer has been in front of me this whole time. YOGA. Yoga should have always been the answer! I got a little help deepening my stretch yesterday from this monkey, and I am reminded that Dharma says: “everything is perfect and nothing is permanent.” 🧘‍♀️
Hit some new highs today. Can’t beat those blue skies. 📸: @run.craft.repeat
Feck yea buddayyyy!